Last Saturday I visited the Bookfest which is currently going on in KL Convention Centre, KLCC. The main reason why I wanted to visit the Fest on its first day is not because of the discounted books but to hear Azizi Ali’s speaking for 1 and half hour at the cost of RM2 only.

My expectation was that the place surely will be crowded before 8.15pm when the program begin but I was wrong. It was less crowded and easy to get seated even though there were not many chairs provided. I arrived at KLCC at about 6.30pm, walking around the fest searching for books (there are plenty of English, Malay and other languages’ books even though mostly are Chinese books)for my students. I found that the bargain is better than during Bookfair@PWTC early this year. I bought a CD for Science Form 1 at the price of RM10 (actual: RM29) from Unik Publication, 6 plastics of BM+BI exercise books at RM1/bag, I also dropped by at Erican language to find out more about their Mandarin courses and drank free Vico as much as I can. 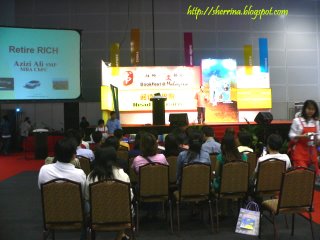 The Azizi Ali’s program entitled ‘Retire Rich’ started at 8.20pm. I guess he didn’t expected such low turn-up, he looked nervous and startled at the begining. But towards the end, he was actively explained about how to retire rich, shared his experience and also promoted his books and seminars. 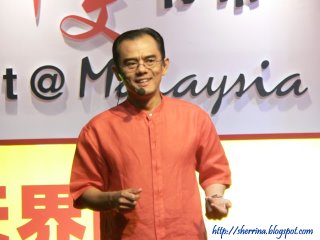 Even though the time was so short, I felt glad that I took the time to been there because now I have another list to add in my existing list (besides saving for emergency, buying property etc). Now only I realized that we should plan and put aside money for retirement if we want to retire with enough money to feed ourselves until death.

One of his story that he shared with us during the talk that I remembered till now is:

“My mother is a govt pensioner. 4 years before she retired, she bought a house and took loan. After retired, her pension is RM900 per month. Just nice for a woman who live in small town. But the house loan that she took 4 years before eaten up RM500 per month from her pension. Luckily her son is Azizi Ali, so everything is settle”

If only every parent has a child like Azizi Ali, life surely beautiful, eh? Anyway, hopefully I will be like him too. I wanted to get the Retire Rich book which was promoted during that day but it is out of my budget (RM69, hardcover version). I’ll wait for the paperback version. In the mean time, I had read several chapters while relaxing myself at Borders, Times Square yesterday. His theory is surely interesting.