THE editor of the popular tabloid Populi was made to resign yesterday over his failure to include any news items related to Mawi in its Tuesday edition.

The decision to terminate the services of Noordin Mahmoody, 39, was a unanimous one passed by an emergency meeting of the board of directors.

The meeting was called after protests by the paper’s stockholders as well as the shocked reading public.

In his defence, Noordin claimed he tried everything possible to include a Mawi item on that day.

“But I realised that we’d covered all those stories already. I simply couldn’t think of anything else.” 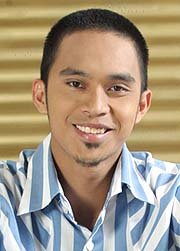 A loyal Populi reader, who only wishes to be known as Tina, said that she was so traumatised by the Mawi-free edition that she had to call in sick that day.

“I looked everywhere — there was no Mawi even in the cartoon or astrology pages. It was like a day on which the sun did not rise,” she says, somewhat pitifully.

Noordin added that up until that fateful Tuesday, Populi had done its job by having at least one Mawi item for 629 days in a row.

He cited this in his plea for leniency to the board of directors but to no avail.

“Noordin failed to discharge his duties in an acceptable manner. And he calls himself an editor!”

Chen offered helpful tips on how the job could have been done.

“Although Mawi didn’t seem to do anything newsworthy the day before, this didn’t stop any of the other tabloids from running at least his picture,” she says, while flipping through a stack of sleazy newsprint.

“Look at this one,” she says, triumphantly holding aloft Mangkuk Perdana. “An article on the cancelled crooked bridge manages to print a Mawi picture because he’s from Johor, which is where the bridge would have led to.”

“And here’s another,” she says, pointing to Bacaraya, whose front page article on an overturned passenger bus that killed 80 starts off by wondering whether the Mawi album was being played at the time of the crash.

“These are just two examples of basic ingenuity that we expect our newspaper editors to possess.

“It’s safe to say Noordin’s career in the tabloid Press is over.”