Yesterday I went to my usual video rental store to return the VCDs that I rented few days ago. As I looked at the shelf for new movies, I saw a Singapore VCD called I Not Stupid Too. I thought I’ve seen the first part (I Not Stupid)somewhere in the store but never attracted to rent it out until I saw the second series. Looks good, I picked a copy of it and another movie to accompany me at night while it’s still school holiday. 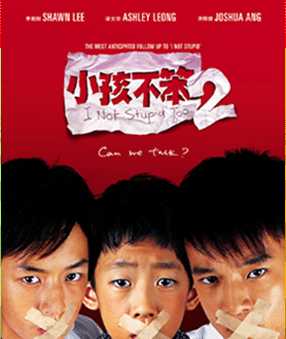 After a good shower, I picked up the movie and watched it on my laptop. It was about 2 hours and 30 minutes movie and I was impressed with the message as well as the storyline. I never knew our small neighbour could come out with such pretty good movie. The most important part, the message of the movie which I hardly seen in any of our local movies yet.

The story is a wholesome story. It touch every single group of people around us. Parent, siblings, teacher, schoolmates, colleagues….almost everyone. The story is about how a simple praise can change a human being’s life. The story is about two different family. A hardworking parent who can afford to get everything for their two boys, a high school and a primary school boy. The kids felt neglected and low self-esteem because the parent hardly praise them. They only know how to blame the kids and only know how to find the kids’ fault without seeing the good side of the kids. The big bro turned into a gangster group who he thought will be with him no matter good or bad. Then the other family, a poor father with a high school boy who only teached his boy with kick and fist. Praise? Once when the boy was 2 years old.

This movie is not only prejudised on one side, but it tried and managed to show on every aspect of every side. The student itself has its own fault, no respect for the teacher and not even thanked the poor teacher who gave free Mandarin dictionaries to them, broke the school rules (keeping porno VCD, bring mobile phone to school). The teacher who refuse to change and adapt with the current way of teaching, living and understanding. He only believed his old way, the way he learnt from his teacher was still relevant in todays’ life where else we know time have change so does the method of approaching the students.

The school principles who only follow the law, the rules without able to think how it could affect the student’s life. For example, the poor boy was expelled from the school. Okay, he did wrong. But they can’t just expelled him without planning what will he do next. The poor father who could not read or write in English had to asked a friend of him to write a letter and handcopied it 300 times to be given to each school in Singapore to begged them to accept his son but all refused because of law, rules blablabla. When the poor boy turned to so-called brotherhood gangster, should the boy be blamed again? The poor boy and the rich kid both turned to the brotherhood whom they thought will accepted them more than their own parent. It was true at the begining, but towards the end its the group who backstabbed at them.

Many current and relevant issues were brought up in this movie. Should a student who commited offence be punished by caning him/her in front of the whole school? Will it teach the others not to follow the bad student’s behaviour? Will the students who witnessed the punishment learn the lesson by watching the punishment? How should a busy parent raised their children in the fast pace world? Is money more important than family? Should parent be blamed for their kid’s bad behaviour? Or should it be the school and teachers’ responsibility?

So many issues which are regularly discussed in our society is being presented in this movie. This is a one movie that makes me think a lot about my role in the society, in the family compared to other movies that I had watched before. This movie should be watched by everybody. This is what I called a wholesome movie.