Skip to content
22/11/2005 sherrina Leave a comment
THE PELICAN BRIEF
It’s now 3.23am and yes, I am online in the wee hours. Hard to catch a sleep after 3 hours of quick nap (a nap, yeah right!) before 12am. While updating this blog, there’s a helicopter been making few rounds near my neighbourhood. God know what are they doing up there at this time and it’s been like this for a week (hunting for escaped criminal? I don’t think so. Flying exercise? Maybe. Nothing to do but to waste the taxpayer’s money..could be).

I am in the middle of reading one of the book which I bought earlier before hari raya, written by John Grisham, my favourite author when I stumble this word: eulogy which means a laudatory speech or written tribute, especially one praising someone who has died.

Anyway, the book is great. It’s about a law student who came out with a brief about the assasination of 2 great judges in the United States. As I was googling, I found out that the book has been made into movie in 1993 acted by Denzel Washington (gosh, he is damn good in this thriller movie. Check out The Bone Collector ) and Julia Roberts (oh gosh, this movie is almost perfect. A combination of my two favourite actor and actress) 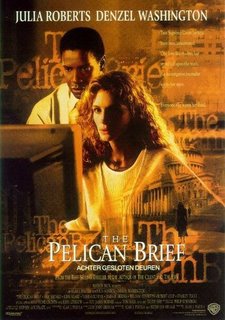 According to amazon.com, the paper back version of The Pelican Brief will be available in April 2006. Wah, take so long to publish the paperback version. 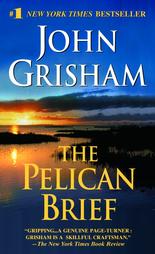 Aiseh, who are playing with the helicopter over and over again? I don’t think I’ve heard any of the animals from the nearby National Zoo has escaped. It’s like those days in the hostels where the warden walked to and fro along the corridor to check whether you are sleeping or stil awake. I’m off to bed now, before the helicopter landed behind my house and yell me to lights off…..