I woke up slightly early than usual. Coz I need to catch up with my best buddy at Terminal Putra before she headed home for raya celebration with her family in Kuantan. I need to send something to her.

I leave home at about 8am, thinking that the road will still be packed with people who are still working on Saturday (private sectors) but I was wrong. Right from Jalan Genting Klang up to Jalan Pekeliling, it was so smooth. It was nice to drive on early morning while listening to raya songs on the radio.

I arrived a bit early. I waited for her for about 20 minutes while taking the opportunity to reply few raya cards which I received this year (heck, I even received one from a Ketua Pemuda Umno cawangan somewhere in Selangor. I wonder how did he get my address) with hope that it will arrived to the receiver before they return to KL.

After meeting her, saying goodbye, hugging and asking forgiveness, I left the place with a bit sad. It would be fun to be able to take the ride back to hometown (which I had few times when I was studying in MRSM Terendak). The feeling of joy and excited going back to kampung is somewhat precious. I have never feel such thing. Coz I don’t really have a proper kampung (except kampung Gombak which the house had been demolished for years and the new house is yet to be build).

I drove back to Wangsa Maju. Did my last banking activities before the bank close for Deepavali and Hari Raya break (it was packed with customers which I have expected) and later headed towards Ampang Point. Hmm..when was the last time I stepped into this place? Can’t remember. It’s still the same old place. The most difficult place to find a legal parking lot. But luck was on mu side. I managed to get a nice park, few steps from the building and the best part, under a nice and cooling shade.

I went straight into the building, to the post office. Bought a few stamps, post the raya cards (with prayer that it will reach on time) and anxiously looking for the Payless bookstore (a second hand bookstore). After searching for it from one level to another, finally…on the first level. Ahhh…the aroma of books. Sniff…Sniffff….aha, John Grisham. Just what I need. After comparing the price of the hardcover books with the paperbacks, I decided to take tha hardcover. Yes, they are bulky but the price is same. One or two books are only available on hardcover. But hey, it’s a great bargain. The books are still in good condition and each cost around RM15-RM18 only (a brand new hardcover of John Grisham’s book cost more than RM70).

After picking up 4 titles which are still not in my collection, paid them and do bit of shopping for toiletries…went home. Helping mom with preparing food for berbuka puasa, went into my room and start to flip on the first book. Oppss..I should be saving this for my whole week of Hari Raya break. Ahhh….never mind. I still have plenty to read. 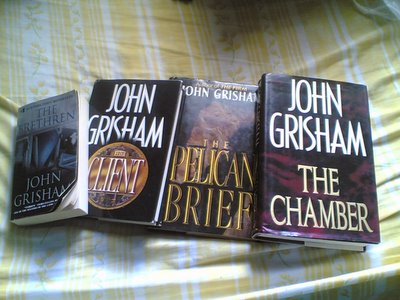 So, my hari raya activities will be: