While studying in CBN for 3 years, I hardly spent much time on game. Most probably because of my pack schedule with school activities and preparing for PMR. I hardly able to recalled among the games that I played during those period of time.

After PMR, I went to MRSM Terendak. It was 2 years of life without games. Not computer games or even video games. I learnt BASIC programming in MRSM but hardly had interest in it. Maybe because of tight schedule in boarding school and we were not allowed to have a pc in our own room.

After SPM, my gaming era reborn. With the RM1000 that I won through an essay writing competition just before SPM, I bought a new set of pc. I entered UTMKL and met a new friend whom later became my best buddy and my game partner. Zura and I spent hours on the machine playing games such as The House of The Dead, Jazz Jackrabbit, and few more. Low Yatt Plaza and Imbi Plaza were among our favourite hang-out. Besides looking for new games, we also loves to tried out new software. 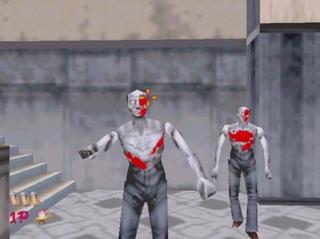 I just loved when the blood shot out when the bullet hit them hard…..urghh!

Thanks to Kak Wan who introduced this game to us. Super addicted.

After we leave UTM and both of us separated to our own path, my gaming activity was minimal. Later, JK Rowling’s hits series of Harry Potter hitted the bookshelves in every bookstore, and followed by the movies from the books. Of course, the games will definitely appeared. Who else created the games, the EA of course. I started off with Harry Potter & The Sorcerer’s Stone, then Harry Potter & The Chamber of Secret and latest in the market, Harry Potter & The Prisoner of Azkaban. It took me 2 months to completed the first game and I slowly mastered the skills. The last game, it took me 2 weeks to finished the game. Errr..of course with a little bit of help from some sites that provides the walk-through steps. Certain time, the game went through really hard till I feel like quiting it. But the strong will to see the end of the game pushed my limit and my strength (I wish I could produce the same sthrength with study & work).

Now, I am left without a nice game to played with. After I completed the third Harry Potter’s game, my student introduced me to The Sims. I started to like it, and continue with The Sims 2 and the expansion pack, The Sims 2 University. Luckily my laptop supported all the requirements to play those games. Now, I’m waiting for the next expansion, The Sims 2 Nightlife which I heard will be released pretty soon and also the upcoming Harry Potter & The Goblet of Fire.

Besides PC games, I also played games on my previous HP Ipaq PDAs. Among the games that I love to play on it were Load Runner (I managed to find slightly newer version that supports Windows Mobile), Lemonade Inc (I learn some business knowledge by selling lemonades), Tennis Addicts and few more. I love the games produced by Hexacto Games Inc that produces many games for pda and mobile phone. Now that I have lost the pda, I have no games to played before I go to bed.

Recently, I read an exciting news in the newspaper. Check this out, the history of Game Boy: 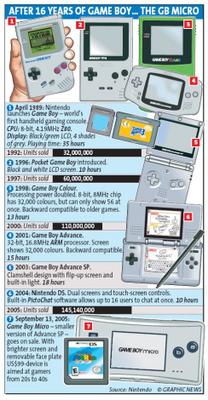 Check out the latest one, Game Boy Micro. Wow….it looks slighly like the Sony’s PSP but this one comes with a build-in battery. Meaning, you can recharge it like a phone. Wow….I want this thing. Besides, the looks is very elegant and according to the review in CNN.com, the GB Micro’s target market are women, casual gamers and those who can’t spend hours on gaming every day.

I surfed in the net and found an ads in game2u.com.my bout the brand new Game Boy Micro’s price is RM 569. Should I buy or should I save more money and get a PDA? PDA means more towards my working stuff and games is just an additional. Not that many good games can be played on a pda. But Game Boy is a pure gaming machine. But I heard that the catridge is quite expensive. I wonder if there is any pirated Game Boy catridge sold in the market? Yesterday, I peeped at the game shop in Carrefour Wangsa Maju but the new GB was not there yet. It was just released this month.

Hmmm..should I get a GB or should I get a PDA? I think I’ll get both. Then I will need the Dockers that has few pockets to keep all my gadgets together. I know, after raya I shall get the GB (hopefully this year’s duit raya does not get affected by the increase of petrol price) and maybe middle of next year then I get myself the O2 Mini that I’ve been eyed for long time. Hopefully by that, the price will dropped below 2K. Especially after the release of the new O2 Exec (yummy!!).

While waiting for me to get the GB Micro, here’s a photo of a Game Boy Micro: 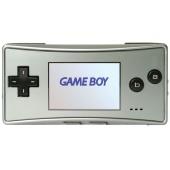