Skip to content
26/09/2005 sherrina Leave a comment
My Personal Gaming History – Part 1
I started to play computer games when I was 6 years old. It was my cousin, who bought a computer when she studied in a college. Whenever I slept at her house, I always played at her computer. During those days, the choice were little. I can’t recall any of it.

When I was in Standard 3, my school opened up a computer club. Those were the days we learn on DOS system. Lots of prompts. I enrolled and learn my first ever computer programming called Logo. I kind of like it very much because it’s drawing programming. But that’s not the No 1 attraction to the computer class. It’s the games inside the machine that attracted me. During those days, my friends and I were crazy over a game called Load Runner.

A simple DOS game like this already made me so addicted till I even purposely skip religion class just to go to school and play this game.

After UPSR, my parent bought me a brand new computer. I still remember the brand, which I thought already extinct from this world. It is called Sepoms. The machine run on Windows 95. Usually on Friday, I will followed my mom to her office which is located in Bukit Bintang. After a quick breakfast, I will be wondering around Imbi Plaza (Low Yat was not an IT hub in 1993) looking for games to play. There was this shop that sell cheap computer games (piracy was common in those days), only RM10 for 3 games. Bundle price. I will be looking through the box to find games that I like. Oh yes, in 1993 the games were still in the big floppy disk (the one that you can flapped like a fan when the weather is hot). I took care of my games collection carefully. Once, I accidentally banged my brother’s head to the wall when he slipped one of the game into the drain after getting it back from his friends.

It was quite expensive. Only two families at my neighbourhood afford to purchase these things. There were two gamepad and the games were stored in a special catridge. Some catridges able to store up to 200 games. Among my favourites are:

Charlie Circus, Tennis, Ninja, and many more. Most of the days during school holiday I will be in my neighbour’s house playing video game from morning until evening before we leave the machine for a game or two of rounders or ‘baling selipar’

When I was in secondary school, I hardly have time for video games. Most of the time I spent at home playing computer games. Among my favourites are Prince of Persia (it was really addicted), Gorrila (you use bananas and aim to the gorrila to shoot it down. This was where I learn about angle), and few more… 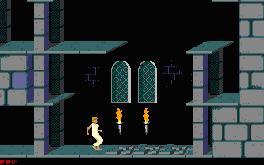 The early version of Prince of Persia.